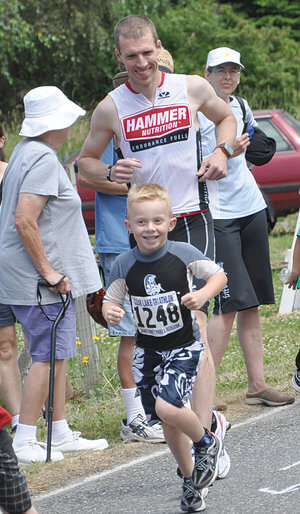 by MICHELLE NOLAN – THE BELLINGHAM HERALD

Lora Olinger said it all when she said, “Everyone finished with a smile.”

Or, as Jeanette Crooks put it, “Others kept telling me, ‘great smile, great smile!” ”

“Everyone” was Bellingham trainer Daryl Smith’s team of nine first-time Ironman triathlon participants from Whatcom County. They all finished well under the 17-hour limit in high heat during the recent Ironman Canada at Penticton, B.C.

“Daryl is just an amazing trainer,” said Gina Crosswhite, recalling Smith’s 10-month program that turned Crosswhite, who was not a high school or college athlete, into an Ironman finisher at age 40.

“I just thought it would be a fun challenge,” Smith said of the task of training nine local Ironman rookies to swim 2.4 miles, bicycle 112 miles and run a marathon (26.2 miles). “I had never coached a large group for an Ironman.”

Smith, a physical therapist in Bellingham, said he won’t forget the emotional impact of realizing how much he wanted all nine to have the satisfaction of finishing.

“I monitored them on the Internet all the way through the race,” he said. “I was very nervous and I couldn’t sleep. I was so excited that they all finished.”

“And this was on a 95-degree day,” Olinger said of the Aug. 28 start. “I am so proud that we all finished. It’s a wonderful tribute to Daryl’s training.”

Olinger, 46, and Crosswhite, both from Ferndale, are longtime friends who crossed the finish line together in 14 hours and 6 minutes. Realizing what they had accomplished, they were especially proud of 46-year-old teammate Roxie Millsap, who followed a special training program designed by Smith because she had undergone surgery on both knees in the past year.

“Daryl is also my physical therapist and I had to had the approval of both my knee surgeon and Daryl to train for the Ironman,” said Millsap, who was a high school volleyball standout at Nooksack Valley in the early 1980s.

“Daryl is such an awesome coach,” Millsap said. “He designed a very creative training program and always reminded me to focus on what I could do, not what I could not do. I couldn’t train by running on land, so I trained by ‘running’ in the swimming pool and by cycling. When I would get excited and want to do more, he knew when to reign me in.

“I mostly had to walk the marathon part, but I finished in 15 hours and 50 minutes,” she said, recalling how much she treasured crossing the finish line to cheers from her eight teammates, each of whom had already finished to their own cheers from family and friends.

Millsap was especially proud to be one of more than a dozen overall finishers from Whatcom County, including husband Rusty.

Late last year, she discovered she would undergo bone-transplant surgery last December on her left knee, preceded by arthroscopic surgery on her right knee. Well before that, she and her husband had given each other a special 10th anniversary gift — the cost of entry to their first Ironman.

“It’s not cheap,” said Olinger, noting the $650 entry fee is nonrefundable and thus attracts only serious entrants. “But it sells out a year in advance on the first day.” There are always people who can’t start or can’t finish Ironman Canada – the organization’s web site says that of the 3,198 people who were registered, 11 percent did not start and 9 percent did not finish.

The other finishers who trained under Smith were Jeanette Crooks, Meghan Manaois, Andrea Doll, Anna Gigliotti and Carol Beebe along with Kyle Nelson, the only man in the group. Smith has been a USA Triathlon certified coach since 2005, the year he moved to Bellingham. He operates advantagemultisport.com and trains triathletes, cyclists and runners.

Never a high school varsity athlete while growing up in Redding, Calif., Smith graduated from Cal State Sacramento with a degree in biology and earned a master’s degree in physical therapy from the University of Puget Sound.

Smith, who is married to Bellingham dentist Catherine Smith, has competed in triathlons of all distances for 10 years and has high aspirations now that he’ll soon enter the master’s division, which starts at 40. He first displayed his potential when he won the 31-35 division of the Grand Columbian Ironman in 11 hours and 40 minutes.

“I became a trainer because I love the physiology behind training,” said Smith, who coaches primarily adults but also occasionally works with children. He was proud to see the older of his two sons, 7-year-old Josh, compete in the Bellingham Youth Triathlon on the same day of Ironman Canada.

Olinger and Crosswhite met when Crosswhite taught physical education in elementary school to Olinger’s daughter, Christina, 22. Crosswhite is a detective with the Bellingham Police Department and is a 10-year veteran of the force.

“We learned about Daryl’s training through (triathlete) Judy Pratt,” said Crosswhite. “She got us together. The nine of us didn’t always train together, although sometimes we did. We just became a big group of friends.”

Olinger said the team was also especially proud of how Crooks refused to quit and fought hard to meet the cutoff time for the 2.4-mile swim by six minutes, ultimately enabling every team member finish. Each leg has a cutoff time to allow participants to continue.

“It’s been an intense, difficult journey for me, learning how to swim,” said Crooks, 51. “I swam for 2 hours and 14 minutes, and I was the last person to qualify to get on their bike. I just told myself, ‘I am NOT quitting on this swim, and crossed my fingers.’ The kayaker (meet official) hit me in the head when she turned around, but I wasn’t hurt and I kept focused. When my fingers touched sand, the crowd erupted!

“I was so happy when I got on my bike, I was talking to myself and crying,” she said. “People were telling me ‘great smile!’ the rest of the way. I passed 727 people on my bike ride and run (she finished about five minutes less than 15 hours as No. 2,105). I owe it all to Daryl. He gave me a great plan and I stuck with it.”

Olinger and Crosswhite shudder when they remember the many days they trained outdoors during the harsh winter of 2010-2011. Crosswhite, the mother of two children, is a Western Washington University graduate who has run 11 marathons since her first in 2006, including twice at Boston.

“My first triathlon was the “Tri a Tri” in 2009 at Lake Samish. I won that one because it had the smallest possible swim distance — a quarter of a smile,” Crosswhite said with a smile. “I’m terrible at swimming, but I’m pretty good at running and cycling.”

Smith’s coaching took care of her swimming challenges, just as it did for Crooks. Crosswhite is still in awe that he trained her well enough so she could swim 2.4 miles to meet the cutoff point and finish an Ironman.

Olinger, a 1983 Ferndale graduate, also was never a high school athlete, but she developed a love of triathlons from her first, the Lake Padden Triathlon six years ago.

“When friends found out how much Ironman Canada costs, they would ask me, ‘Have you ever thought about going to Hawaii and lying on the beach?'” Olinger said with a laugh. “But an Ironman was on my bucket list, and now I want to keep going.”

Smith said he had to be cautious while training Ironman beginners. “I had a clean slate,” he said. “My biggest challenge was how to get nine first-time Ironman participants through without hurting them during training. We trained five or six days a week.”

Olinger was especially grateful for the cycling training. “We went up to the two mountain passes, Richter and Yellow Lake, to see what it was like riding them,” she said. “This was the first time I’ve trained where I have not been stressed.”

Olinger and Crosswhite were particularly enthused about their strong marathon finish. “People were dropping like flies,” Crosswhite said. “We passed a lot of people.”

“Lora and Gina passed 629 runners,” Smith said of their marathon.

Smiling pretty much all the way, of course.