Rolling into the Summer Races

Rolling into the Summer Races

Time has flown by since the last post, as it has been a very busy month and a half of coaching.  Amazing performances continue with the Advantage Multisport crew.

With an improved emphasis on pacing and nutrition, Kevin Carter had a great race at the North Olympic Discovery Marathon, setting a PR in his build towards the Bigfoot 45mi trail race in July.

Chris Chesson raced his first 70.3 in Victoria, pacing to finish strong and happy.

Bellingham ultra superstar Gina Crosswhite ran the Sun Mountain 50k and raced in the Vail GoPro Mountain Games as buildups toward some more big ultra races later this summer and fall.  Check out this inspirational TV interview with Gina in Vail. https://youtu.be/dgX6Xf_NUFA

Mary Doherty indicated great form in helping her team on the road bike to a second place in Ski to Sea.  She followed it up the next week with a huge PR at Victoria 70.3, placing 7th in her AG and only a few minutes out of a World Champs slot. 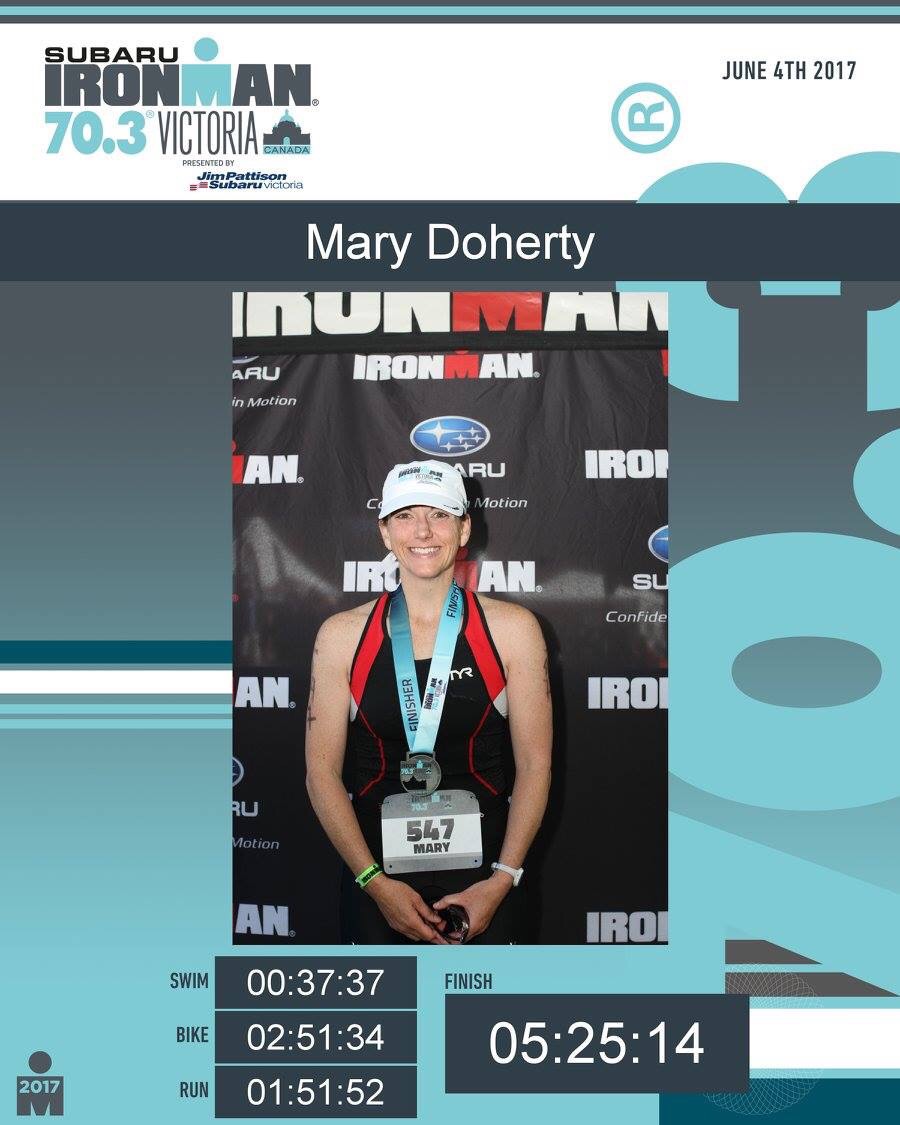 Big PR for Mary, smashing her prior time with a kick and a smile!

Martin Ehrich ran negative splits on the run and nailed his nutrition to have a fantastic race at Victoria 70.3 as well.

Joseph Gianetto set a PR on the bike at Ski to Sea.  He and Sayra Engh placed third in the mixed division at the Bellingham Swim-Run.  These two will be racing in Coeur d’alene at both the 70.3 and Ironman distances this summer, and judging from their steady improvement, will be crushing their prior best performances.

Sean Hackney made his Triathlon comeback after leg surgery at the Blue Lake Olympic, we are excited to see his return to great health and performances leading into the fall big races.

Corbin Hudacek had a fantastic month of racing, racing in St George 70.3 and placing 9th in his AG after only 3 runs in the prior 5 weeks due to a bike crash.  With a healed hip, we were able to step up training, and his fitness was sharpened with some great results on the bike in May, placing 6th at the Mutual of Enumclaw stage race, then a fantastic bike at Ski to Sea.  The month culminated with a dominating win in his AG at Victoria 70.3, and second fastest amateur bike on the day.  We are excited to be planning his buildup to the World 70.3 Champioships in Chattanooga in September, which will include some big bike stage races and other triathlons this summer. 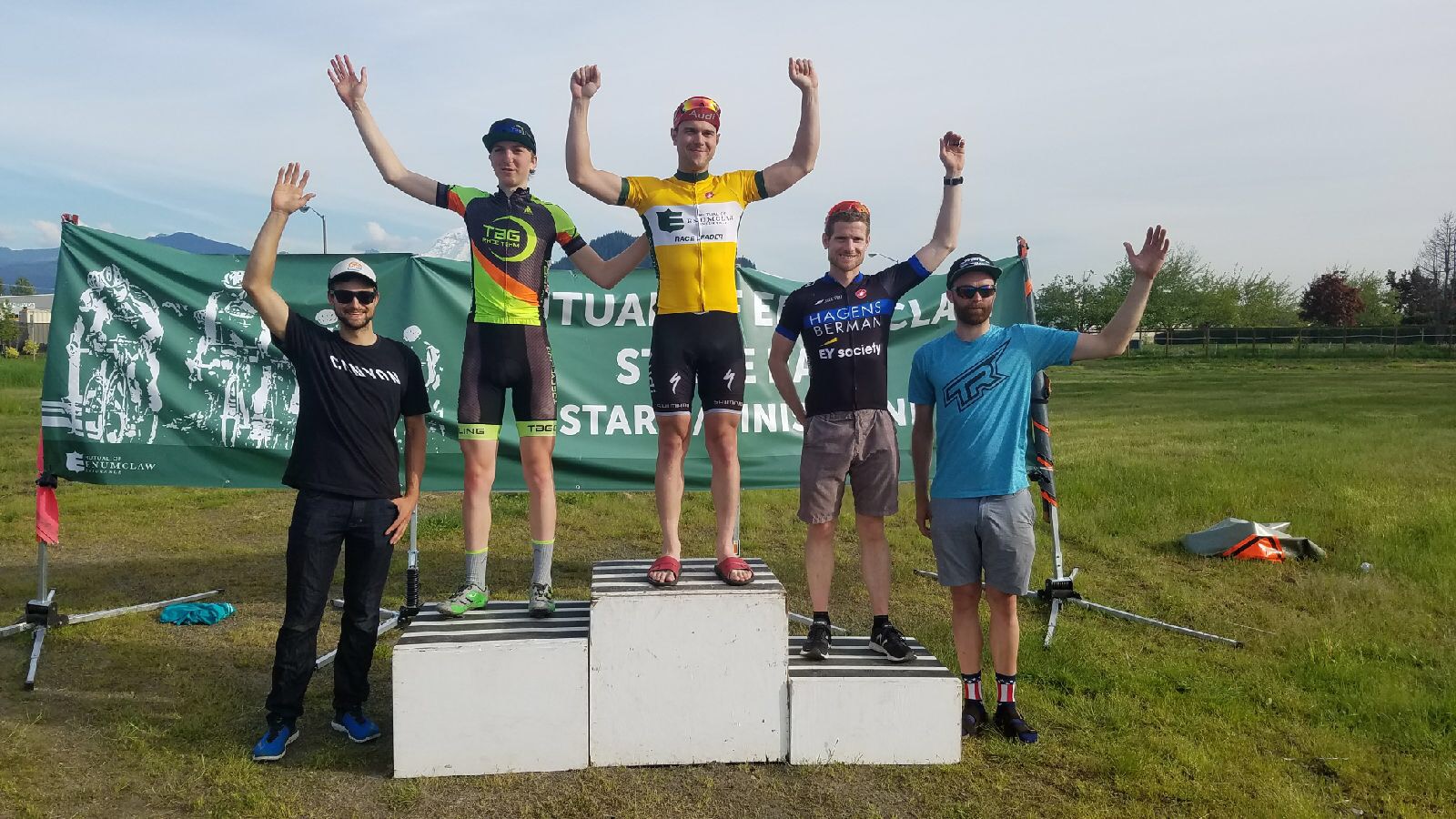 Chris Hughes made a great comeback to racing at Victoria 70.3.  After a year rehabbing from a car/bike accident.  So great to see Chris back in action, and all the numbers point to an outstanding performance to come at Whistler 70.3 in July. 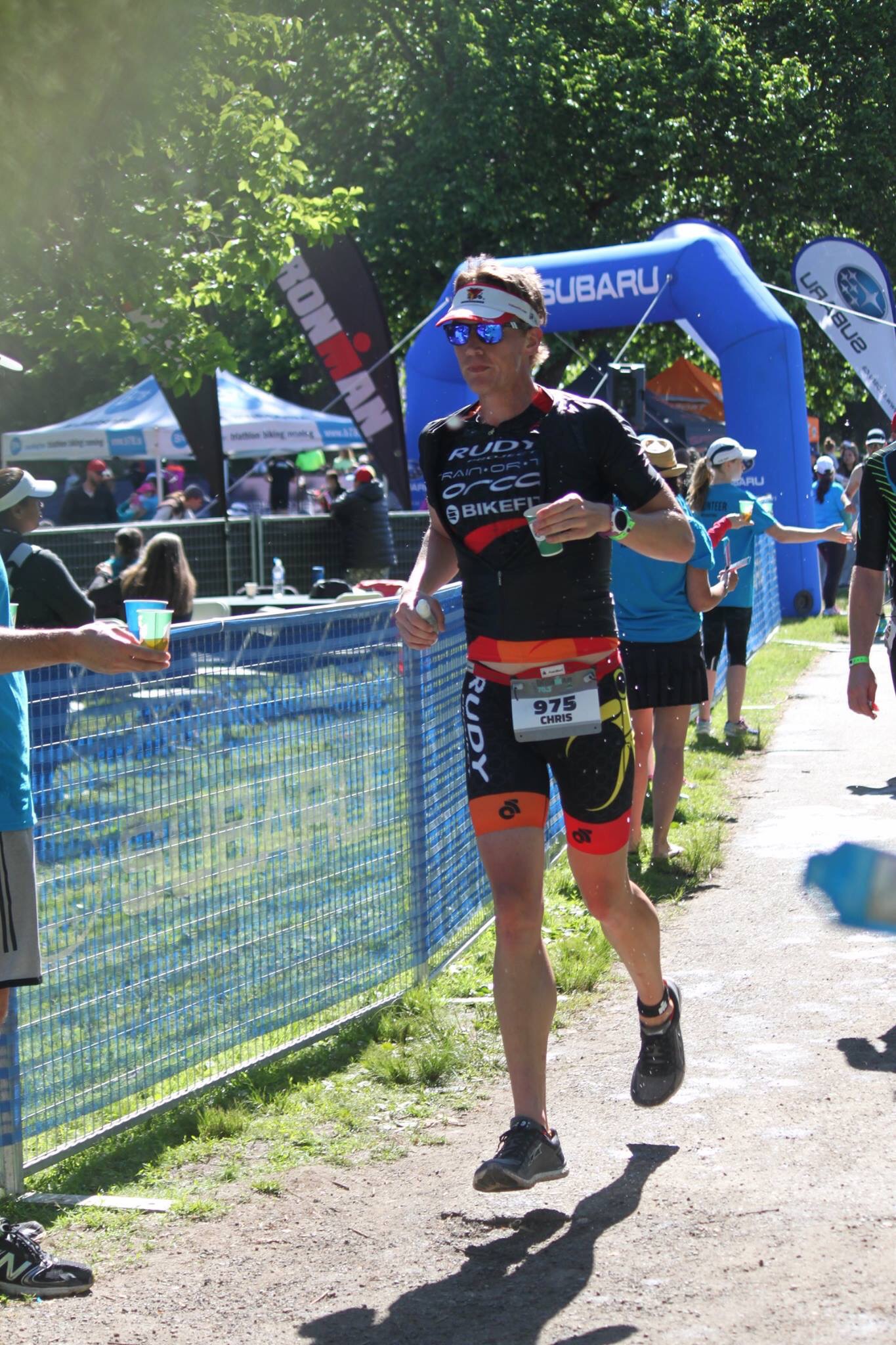 Chris rocking the run at Victoria 70.3

Joe Morelli raced in his first 1.2mi Open Water swim this past Friday, and followed it up with his first 75mi bike ride on a very challenging hilly course on Saturday in his build to his debut at Ironman CDA this August. 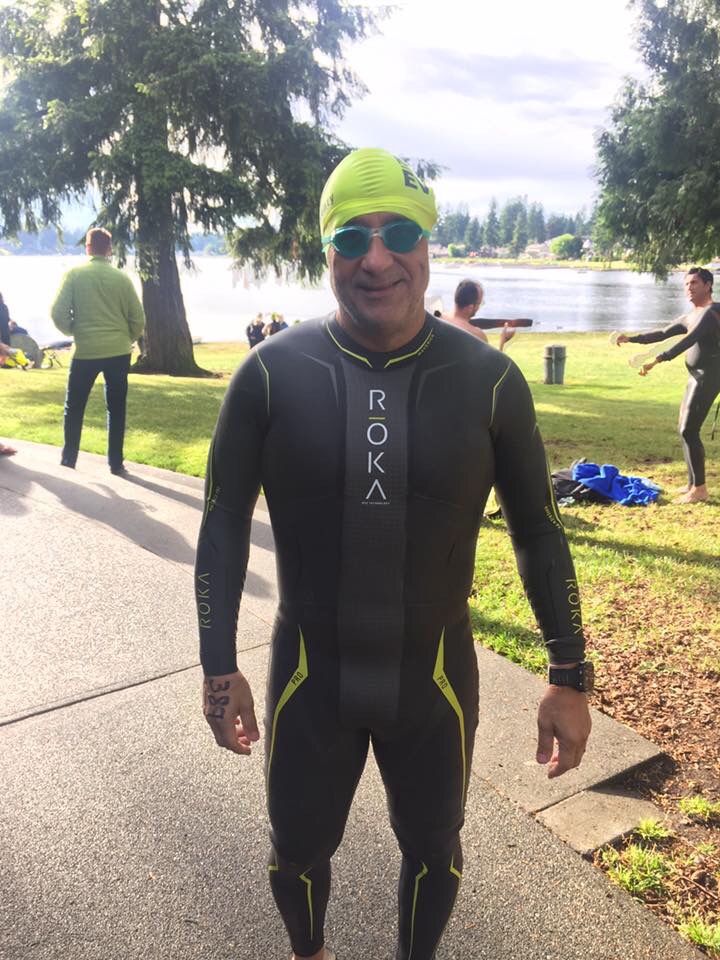 Joe all prepped and excited about his first open water swim race.

Ali Riecke continued her impressive progression on the trails with 2 PRs at the Orcas Island 50mi trail race, where she placed 6th overall female and won her AG, and the Echo Valley 50k, where again she was 6th female overall and knocked an amazing 1 hour and 15min off her prior 50k best time on what we had scheduled as a “training day”. 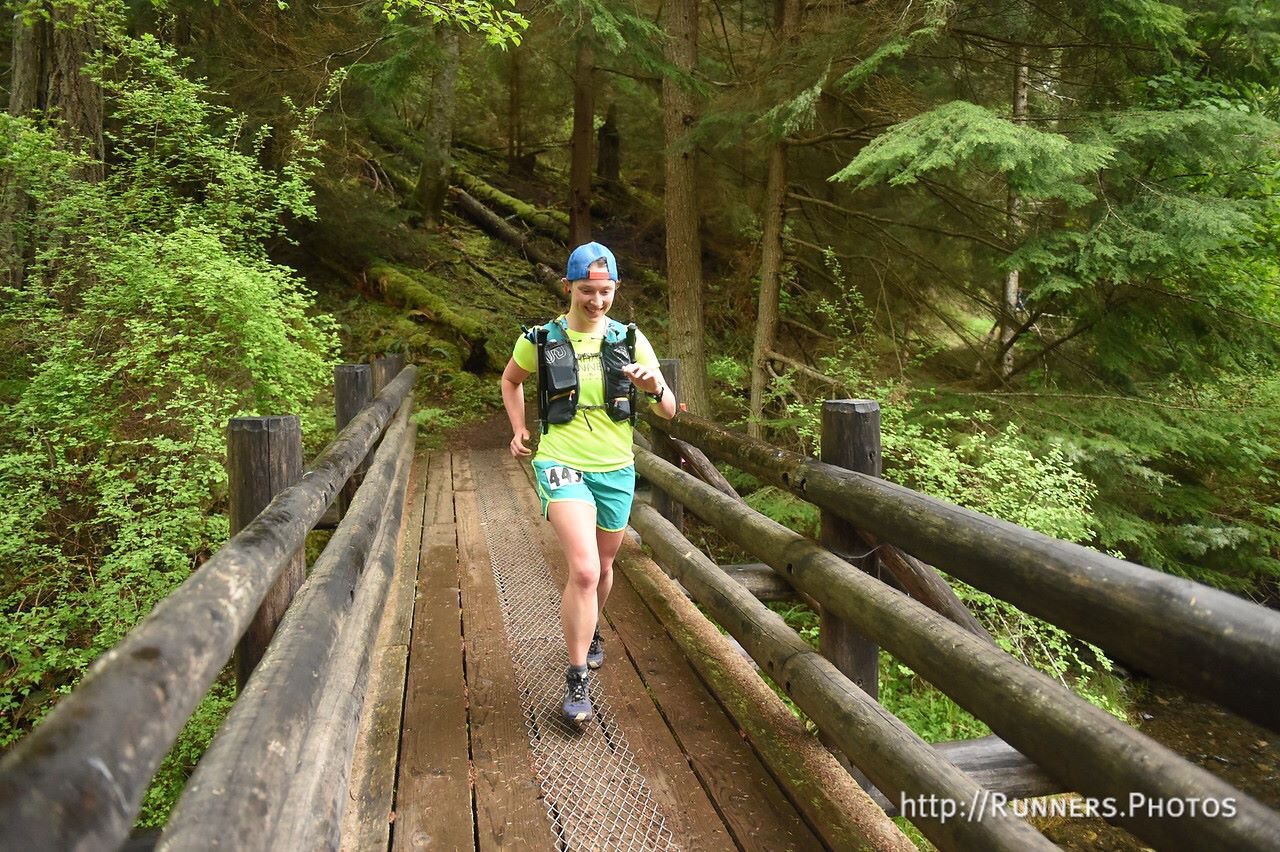 It was so exciting to see Marti Riemer back out racing at Ski to Sea, after a diagnosis of hip DJD has curtailed her racing this year. Her swim and bike training performances are fantastic right now, and we are excited to see her smashing the fields at aquabike races this summer.

Jessica Rogers continued her racing success with a 3rd in her division at the Bellingham Swim-Run, a big PR on the bike to help her team with their division at Ski to Sea, and then a complete domination of her AG by over 10min, 6th place female at the Vineman Olympic Distance Triathlon.  It is going to be an exciting summer of racing for Jessica. 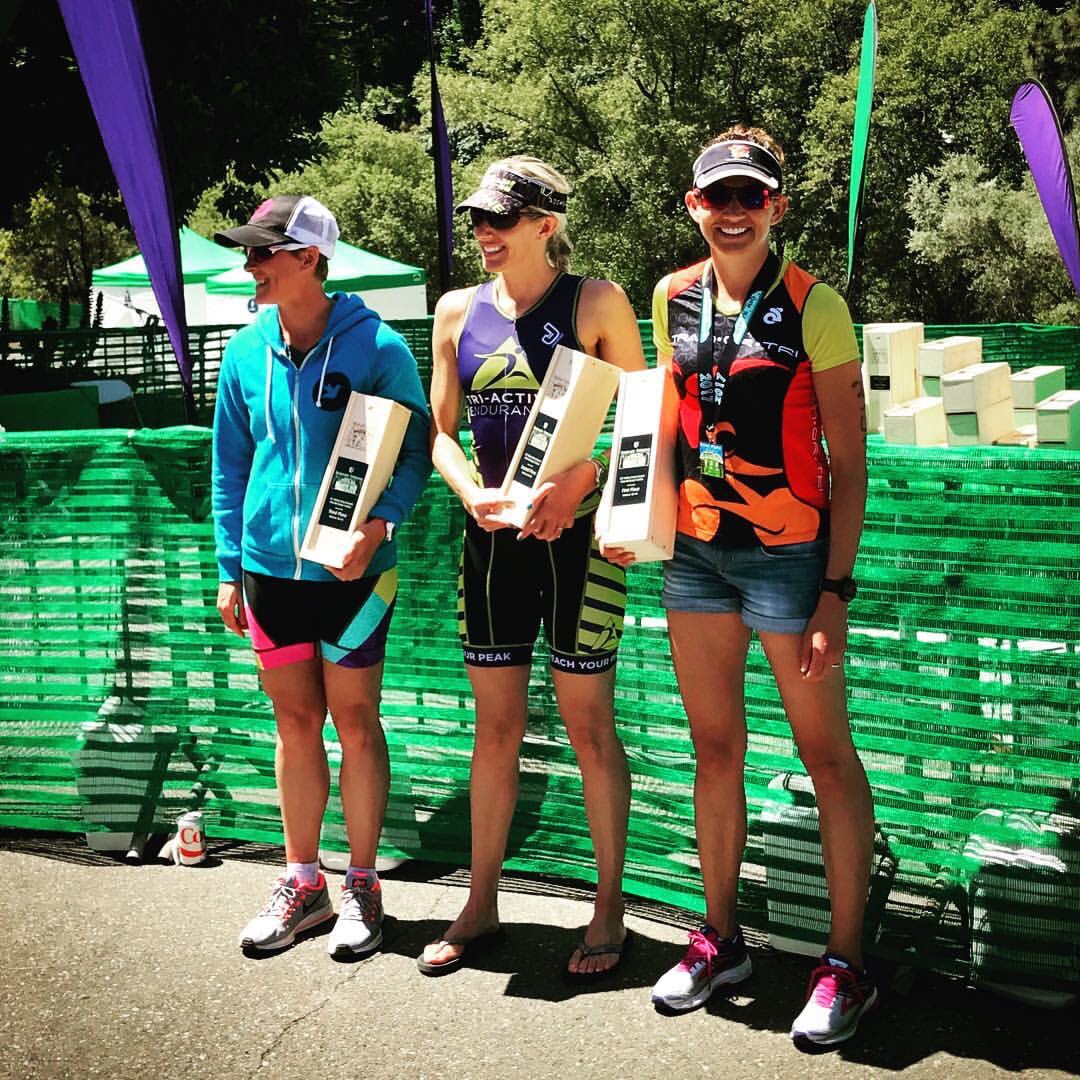 Jessica dominated her age group by over 10min at the Vineman OD race.

Kaitlin Sellereit set a PR at the Vancouver half marathon running so strong over the course.  She will be racing a marathon this fall and judging by this performance, will be ready to smash last year’s marathon time. 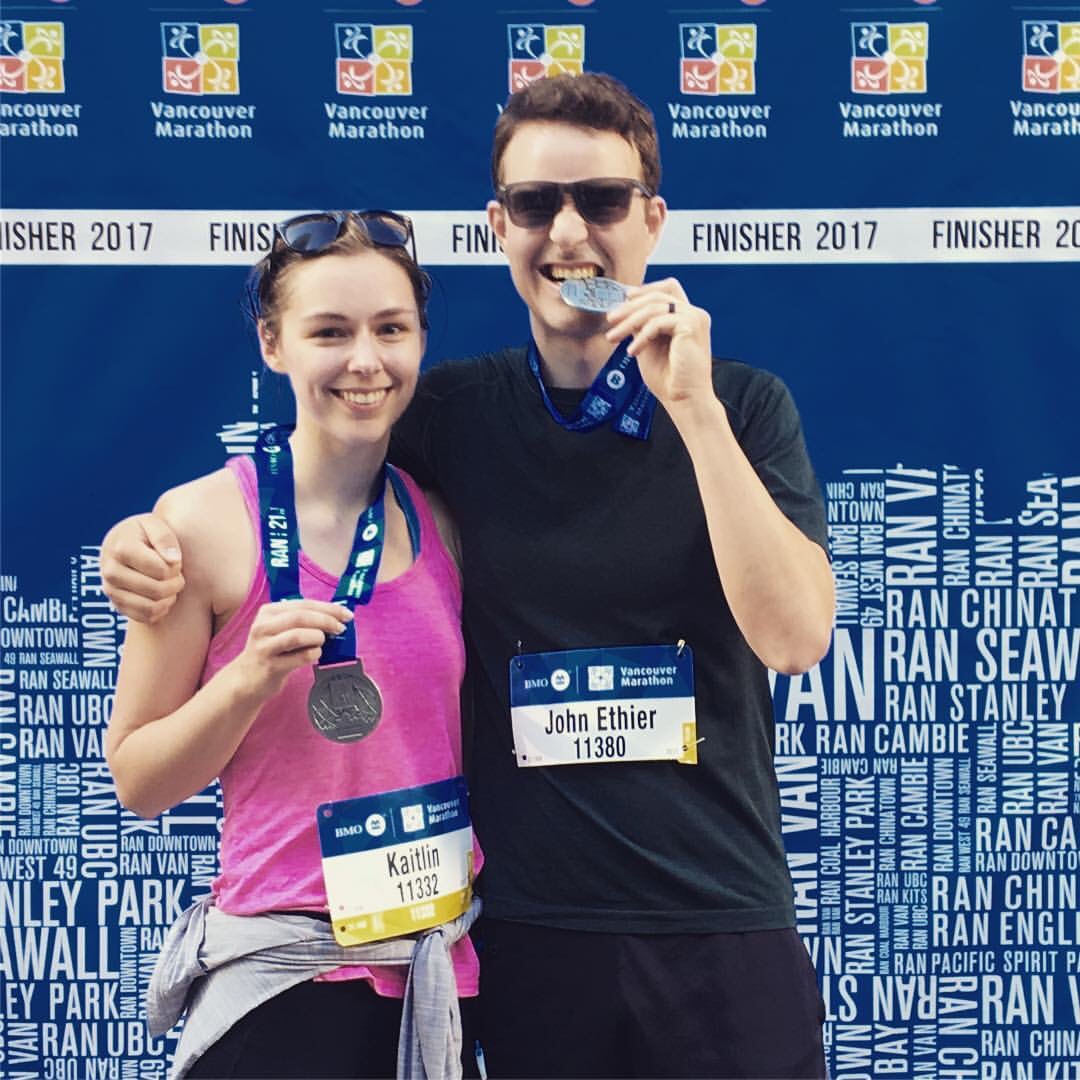 Kaitlin ran a very impressive 1:42 at Vancouver, a 3min PR at the half marathon distance.

Lisa Wayerski ran her first trail 25k at Sun Mountain on a hot day.  She persevered through some cramps to finish strong and is back into her build for big races at the challenge Penticton HIM and Ironman Florida later this year.

Rene Wendt created her own event by running the rim to rim at the Grand Canyon in late May.  Her prep for this adventure went perfectly, and she ran steady and strong beginning to end, enjoying the rugged beauty of the canyon.

There will be so much more to report as we move into the summer racing season.  We have seen many exciting performances so far and I am amped to celebrate the races of these and all the other AM athletes in the coming weeks and months.