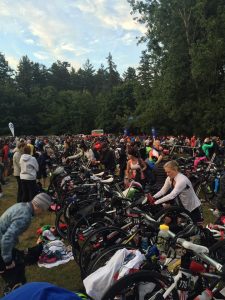 The 2016 version of the Victoria 70.3 saw great performances for all Advantage Multisport athletes. Where the day before had us experiencing cold winds and side gusts on our little shake out ride that added to prerace nerves, raceday dawned calm, comfortable and confident. I even saw looks of disappointment rather than relief when at bike check in it was stated that the swim would be shortened due to overwhelming weeds in the lake. This crew has been putting in the hard yards in the pool and lake this year, and it is exciting to see them anxious to show their new swim prowess.

The swim was shortened to a stated 1500m, and after an encouraged swim warm up, the tight starting shoot that was in place made it impossible to reach our desired locations in line with others that would swim our pace. The “rolling start” did not seem to live up to its promise. We had several athletes that could swim low 30’s stuck way back with the 60min swim group. There were others near the front that couldn’t slip back to where they wanted to be, which I am sure resulted in several fearful dunkings as faster swimmers went by. I had hoped to start near the front, but was stuck about 100 feet back from the start and had to swim around and over athletes the entire swim. A larger swim shoot or better organization could help this work much more to plan.

Even with the chaotic swim, the crew emerged from the water strong and unscathed, ready to do battle on this magnificent new one loop bike course that was being debuted this year. The bike was a legit course, full distance compared to the prior 2 loop course, with many long and challenging climbs in the last 20miles. We had taken the time to drive the course the day before and all agreed that the first 60k of this course should be treated with patience so that the mind and legs would be ready for the last hilly miles and the run. Needless to say, the group executed to perfection and, everyone crushed this course.

Brent Hartwig showed patience and strength with his return to the 70.3 distance after 2 years developing into a short course animal. He moved through the field, climbed like the competitor he is, and then ran negative splits on the run to finish in a fantastic time. It is amazing to see Brent’s progress over the last 3 years.  He is a student of the sport and races with all his might.  His goal race is Calgary 70.3, and he is showing great form as we put the final touches toward that race.

Our IM Canada bound athletes also showed new strength and courage. Sean Hackney swam and rode strong, cruising in with a great bike time despite losing 4+min due to the chain issue. He then set out running a great pace but unfortunately had a tangle with a root and fell hard on the run course. In a display of mental toughness that will be something to draw on at IMC in July, he stood back up and finished strong with severe rib pain that limited breathing. Rusty Millsap and Roxie Millsap also displayed breakthrough performances both mentally and physically. Both had great swims with improved pacing, smashed the bike with PR times on this challenging course, and then ran to PR runs finishing strong and with smiles. I am so excited to see what these two will do in 6 weeks time in Whistler with the progress they have made this year.

Carol Beebe and Michael Mallory swam and rode strong then battled home on the run to finish happy. While both admitted that it wasn’t their best race, these performances will serve to be a great platform for the summer and fall races to come.

I had a great lesson not to be over dependent on gadgetry as both my HR monitor and power meter would not work on raceday. I always council athletes to learn the “feel” of their effort levels just in case this may happen. I raced to exertion the entire day and felt at the top of my game. A one second per kilometer negative split in the second half of the run reinforced that I had performed to my best on raceday without the distraction of looking at numbers. The tools can offer great information, but ultimately we have to internalize our pace and plan, and just let it play out on raceday.

I can’t emphasize what an honor it is to be able to work with this fine group of people. The travel and race experiences are some of the finest moments of my life. I am looking forward to many more to come.  Congrats to all the Bellingham athletes that raced on Sunday.  It is always fun to see so many from our small city make the trip and perform so well at the big Northwest races.